Running Containers in a Secure Environment 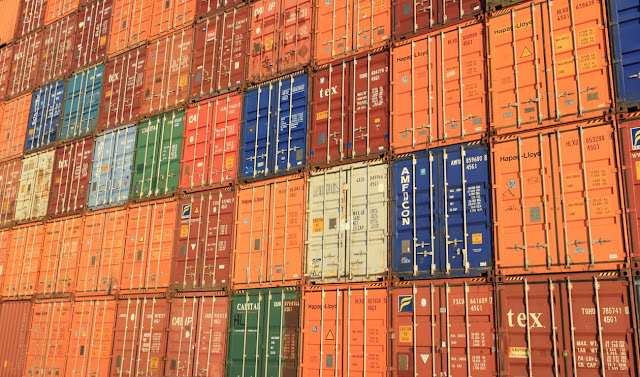 As you will see, this one requirement modifies the original functional solution significantly. Security vulnerability management is only one of the non-functional ‘lenses’ that an enterprise IT system needs to be reviewed against to ensure it works. See Figure 1 below for some other lenses that need to be applied to the solution to validate that it is fit for purpose. 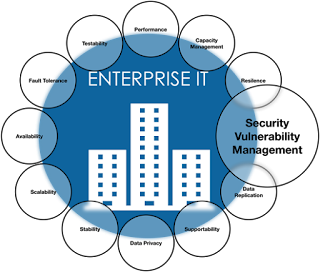 Consider the simple use case, deployment of a container. This is the example that is seen time and time again on videos and demos. The archetype pattern for containers. In an environment where application development and hosting are separate functions (i.e. most of the time) the process might look similar to that in shown in Figure 2 below. 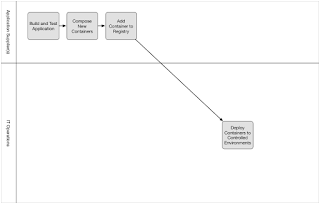 The application development team is responsible for packaging up the container and the operating team is responsible for installing it on a host (or cloud platform) and, typically, managing it to achieve and retain certain service levels. The difference between the demonstration and the real world deployment is that the non-functional requirements are an absolute reality. Not only a reality, often non-negotiable in a mature IT organisation who have the experience of when things go bad! The next section looks into a little more detail about what security controls might be needed to ensure that the deployed containers don’t compromise the security of the IT estate.

Container security is mostly focussed with spotting, containing and managing security vulnerabilities. Vulnerabilities come from a variety of sources:
It is a common misconception that containers are inherently secure because security is built in. It is true that containers at the application level appear to be more secure as by default containers don’t open any connection ports thereby reducing the attack surface of the container. However, containers (at the time of writing) need to run at root level privileges on the host machine and there is currently very limited protection to stop a malicious container from exploiting this feature to its advantage.

One of the differences between virtual machines (VM) and containers is that VM technology has matured to a level where VM separation can be protected (though not ensured) by hardware enforced separation. In other words, computer CPUs contain instruction sets to enable VM separation and greatly reduce the attack surface between VMs on the same physical host. Containers do not have this level of maturity yet. See the section below on deployment options for more discussion on this topic.

The core concept of container immutability is that once a container is composed that it always be treated as a locked box. A container must never, ever be modified in any other place other than where it was originally built. This integrity is key to container portability and can be validated via container signing. Signing is a whole different topic and not one that will be explored further here.

The immutability is an advantage from a functional perspective but it is a very large disadvantage from a security management perspective. Imagine the case where a security vulnerability is identified in one of the components inside a production deployed container. Rather than conducting the cardinal sin of patching the deployed container in situ, the container contents need to be patched at source by the application development team.

Once the patching of the container contents is completed, the container needs to be rebuilt, tested and then re-deployed. Finally, the system as a whole needs to be regression tested in a staging environment to make sure something didn’t break. This is where an automated build pipeline helps significantly as it will take a lot of the effort out of this process.

The conclusion here is that the immutable containers, in perfect world, will be frequently refreshed from source in order to make sure that the latest patches are included in the live containers. In reality it is unlikely that there would be the need or desire to do this refresh except when there is a direct need. For example, when a security vulnerability has been found in a production component. Therefore it is very important that live running containers as well as development containers are frequently checked for new vulnerabilities as new vulnerabilities may have been discovered (and patched) after the container was deployed to production.

In order to provide an element of control it is worth considering adding a vetting process to create a trusted source repository of security checked ‘parent’ containers. The trusted source would be the master repository for deployments to controlled environments rather than the public registry. This process would provide an element of control for security but it is recognised that it can constrain the velocity of a project being delivered via agile methods. Where the middle ground is will depend on the organisation’s Architecture Entropy level (see further reading).

Applying the suggested modifications to the process shown in Figure 2, of course, adds in complexity. The core pattern of deployment still exists but the increased controls and process dwarf the original pattern. This is illustrated in Figure 3 below. 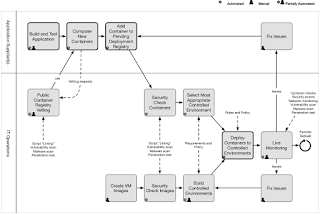 The next section goes on to explain the deployment rules and policy aspects of determining the most appropriate hosting locations for containers.

Container deployment requires careful management and control. This might be:
Regardless of the situation there needs to be some policy and control. The deployment is all about balancing security and flexibility. For instance Figure 4 shows perhaps the most secure container deployment option. Clearly this is taken to the extreme but the policy decision was that no cohabitation between containers is allowed on the same host. The physical separation enforces security but also removes all of the benefits of containers.

Going to the other extreme it is feasible that all containers could be deployed on any node in any combination. In other words there are no constraints on cohabitation. Figure 5 shows this type of flexible configuration. Although it is an extreme example it is highly likely that there are a number of deployments in the real world that look like this in production. This is not a good idea for a secure system as can be seen by the variety of security threats at each level of the stack (Figure 7). 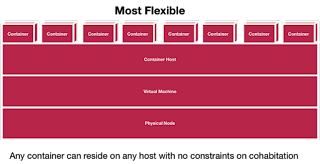 The reality is that there will be a compromise between security separation and the need for flexibility. The cohabitation rules will likely be different for different environments depending on the security levels that environment is running. The good news is that a container shouldn’t care what host it is deployed on as long as there is a network path to the containers and resources that it needs to communicate with.

To determine the rules it is important to understand, for each security level, what constraints are in place for splitting virtualisation layers across different boundaries. For instance can VMs (or container hosts) in different network zones be on the same physical node? If so, in what security classical levels is this allowed? 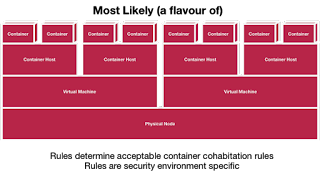 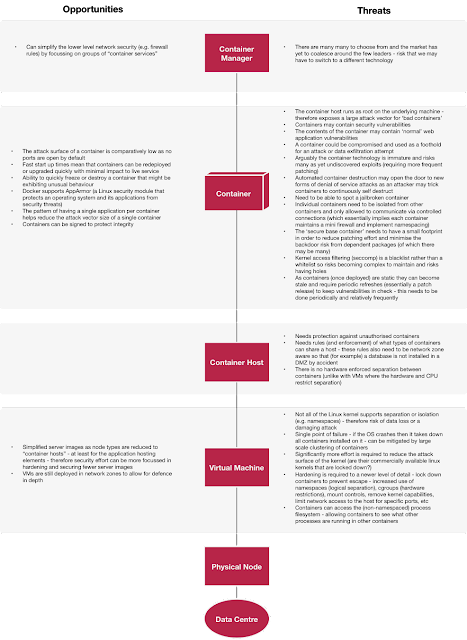 Containers themselves are immutable but their security status is constantly changing. Unchecked containers are validated, previously ok containers are found to have vulnerabilities and problems are fixed.

To keep track of the security position it is required to allocate a security status to the containers. It is proposed that the following levels are used:

The relationships between the statuses are shown in Figure 8 below. The status is not a static concept and therefore the containers must be continuously validated.

The continuous security testing performed as part of the validation process will be altering the security state of containers. The larger the estate, the higher the frequency of the change. It is important to put in place a container security management process to keep on top of the security problems in the estate.

The instrumentation helps by automatically sending callback notifications to a central deployment register. These callbacks are sent by the containers themselves at key points:
The callbacks allow the deployment register, a form of CMDB, to keep up to date on what containers are deployed where. More importantly it also tracks when containers are started, stopped and suspended. This latter part is important for policy enforcement to ensure that requests to suspend or stop a container found to have a problem with it have been complied with. 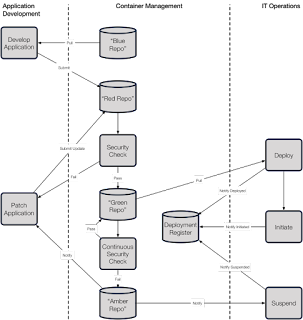 Pulling together all of the threads mentioned in this paper means that it is possible to start to understand the end-to-end aspects of secure container management. Of course, containers still need hosts to run on and so similar processes are required to manage and check the host operating systems. It is interesting to see how much complexity is added when looking through a single non-functional lens. Imagine the complexity of a design when all of the non-functional lenses have been applied to a design. This is one of the reasons why enterprise IT is actually very hard to do well!
Do containers simplify everything? Not really when you look at the big picture. They certainly help simplify certain areas and of course create new areas of complexity. I am watching with interest if “Containers as a Service” (CaaS) takes off in the market. A CaaS host will worry about a lot of this for you. Hopefully!

This is a post in 3 parts:Part 1: IT’s Complicated!  (this post)Part 2: The Cost of ComplexityPart 3: Practical applications
IT’s Complicated! The study of System of Systems is a branch of IT research that I was recently introduced to by Marc Fiammante who has been guiding my research in this area. The concept of a system of systems is a loosely coupled collection of independent systems that all collaborate. However, when viewed at the macro level, the interactions create a new system that is greater than the sum of its parts. The standard example of a System of Systems is the Internet but the theory can be applied to pretty much anything from the collection of a city’s individual services creating an economic power house down to a modern smartphone.

The study of systems of systems looks at the interactions and behaviour of a collection of interoperable systems without exploring the details of the individual systems themselves. In the context of this post the system of systems is syno… 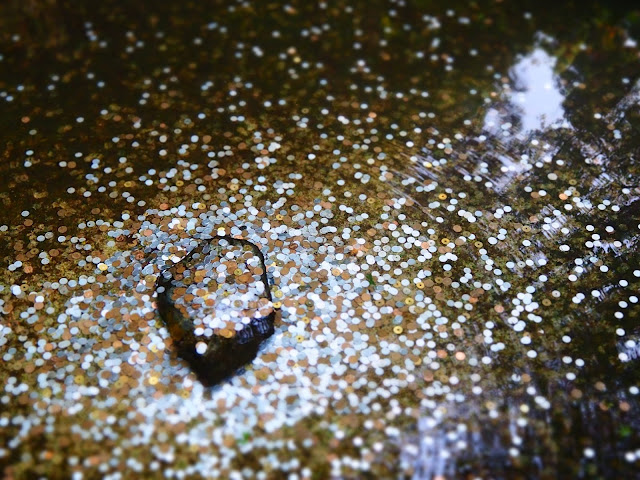 A.k.a. Why Enterprise IT is never simple

I have been thinking about this theory for a while now but it has taken me some time to put it into words. There is a lot more thinking to be done but I thought I would share the current state of my thinking now rather than continue to mull over it for another 2–3 years. In a nutshell, architecture entropy attempts to define the complexity state of an enterprise architecture.
In thermodynamics, entropy is used as a measure of the disorder in a closed system, the higher the entropy value the higher the disorder. This measurement of disorder can carry across to IT architecture. In thermodynamics, the entropy gain typically comes from an external force such as energy. In IT architecture the entropy gain comes from change.
Architecture entropy gain is the term I use to describe the slow design erosion away from a structured, governed and organised solution state towards a more disordered state as the architectural and structural integrity of the sy…